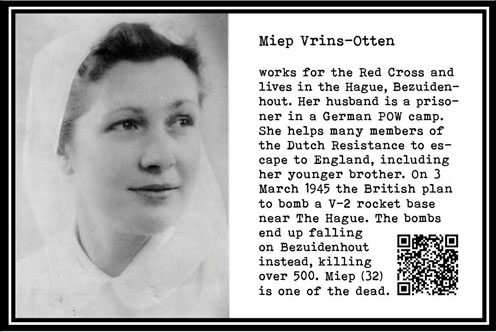 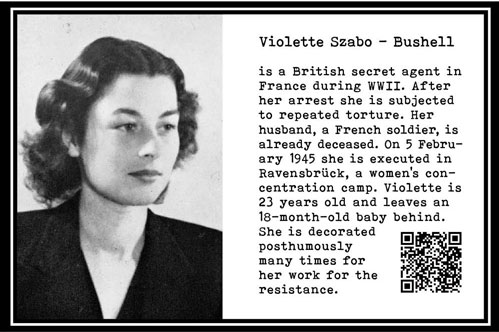 In World War II (WW II), which began on 1 September 1939 with the German invasion of Poland, the Allies (including Great Britain, the Soviet Union and from 1941 the United States) faced the Axis Powers (in particular Germany, Italy and from 1941 Japan).

In May 1940, the Netherlands, Belgium and large parts of France were occupied by German troops. The battle takes place on fronts in Western Europe, Russia, Africa, Southeast Asia and the Pacific Ocean. After the British-American invasions, on July 9, 1943 in Sicily and on June 6, 1944 in Normandy, the odds turn and Germany is forced into the defensive.

On May 7, 1945, with the surrender of Germany, the war in Europe comes to an end. After Hiroshima and Nagasaki were destroyed by two atomic bombs in early August, Japan capitulated on 15 August.

Victims: between 70 and 72 million dead, of whom an estimated 25 million are soldiers, 40 million civilians and 6 million Jewish Holocaust victims. Of the warring countries, the Soviet Union is hit hardest by nearly eleven million military and nearly twelve million civilian casualties

The monument to the Partisan women of Venice

At this location on August 3, 1944, seven political prisoners, including some partisans, are murdered by the Nazis. The partisans, socialists, communists, fight against both Germans and fascists in their own country. The latter are exceptionally cruel by torturing opponents to death and also killing their wives and children. After the occupation the partisans take revenge. During WW II, around 460,000 soldiers and civilians were killed and perished throughout Italy. 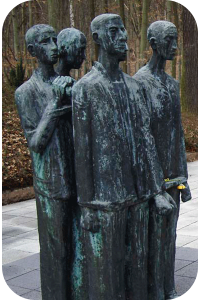 Monument to the prisoner of concentration camp Mittelbau-Dora

From autumn 1943 an underground factory for the production of V-1 and V-2 missiles (V = retribution weapon) was established in this subcamp of Buchenwald concentration camp. Concentration camp prisoners and forced laborers, men and women, are locked up here and have to work day and night. Many of them die after a few weeks because of the terrible working and living conditions. The number of victims is estimated at more than 26,000. 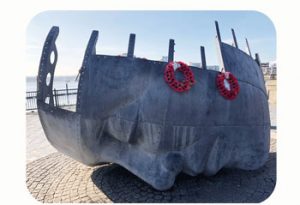 Inscription: IN MEMORY OF THE MERCHANT SEAFARERS FROM THE PORTS OF BARRY, PENARTH, CARDIFF WHO DIED IN TIMES OF WAR”

The British merchant navy is getting closely involved in the war. It is of vital importance to provide the homeland with resources, weapons, ammunition, fuel, food and everything needed for the defense. The ships are in constant danger not only by being shot at by German submarines, but also by attacks from the air. The British fleet has 200,000 crew members worldwide, 30,248 of them are killed. 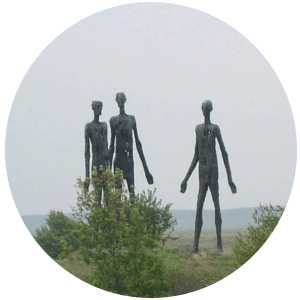 This four-meter high statue commemorates the victims of the “Novi-Sad razzia”. In January 1942, in a systematically prepared operation, the Hungarian occupiers murdered more than 1,300 Jews, Gypsies and other Serbs. Many victims are killed on the city beach where their bodies are thrown in the holes of the frozen Danube. 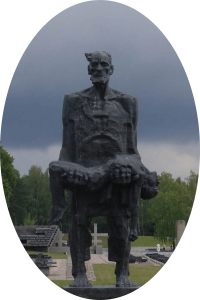 ‘The unconquered Kaminsky and his son’

On March 22, 1943, virtually all 156 inhabitants of Chatyn were burned alive by the Nazis in a barn. Chatyn is a symbol of the genocide of the Belarusian civilian population: 5,295 villages are destroyed, some of which dozens of times, sometimes up to five times. The population is burned alive in 618 villages. 136 villages will never be rebuilt again. More than 2,230,000 Belarusians (a quarter of the population) do not survive the Nazi occupation. 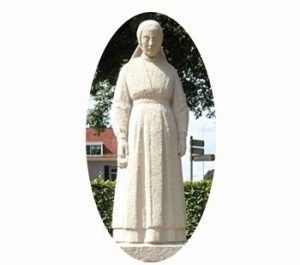 ‘The Grieving Widow’ also called ‘The Lady of Putten’

In 1944, the Puttense resistance movement launched an attack on officers of the Wehrmacht, which failed. The next day, on October 1, the occupier performs a raid in the village in retaliation. A total of 110 houses are totally destroyed. On October 3, the women, boys and old men slowly return to Putten. Of the 659 removed men, 58 are released from Amersfoort camp after medical examination. Fourteen managed to escape during the start of the transport from Amersfoort to Neuengamme, Ladelund and other concentration camps. After the war, 49 men returned to the Netherlands, where another five men died as a result of the hardships. A total of 552 people are killed. 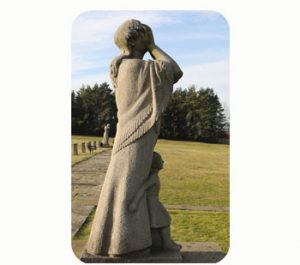 After the attack on Governor Reinhard Heydrich in 1942, Hitler orders Bohemia to wade through blood. The best known revenge action is against the mining village of Lidice where all men are killed immediately. Almost all of the women and children die in concentration camps. The village itself is destroyed by bulldozers. Two weeks later, Ležáky comes across facing the same fate. The number of victims of the revenge actions is estimated at 1,300. 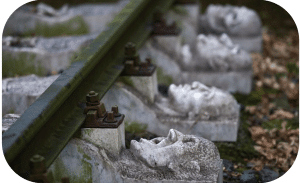 This workshop for repairing steam locomotives has been part of the German war industry since 1944. Hundreds of prisoners from Buchenwald concentration camp, mainly Polish and Russian, are employed here. Working conditions are tough and there is a lack of food. Every month 20% of men drop out due to death or illness. When the front of the allies is approaching, the camp is cleared on January 29, 1945. 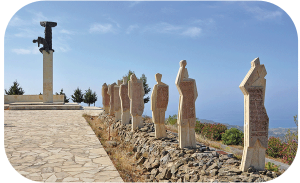 Monument for the victims of the massacre in Amiras

In 1943 the German occupation force destroyed, in response to a major attack by partisans, some twenty villages in the southern part of Crete. In addition, the more than 500 residents are killed. Every village has its own memorial monument. The large joint monument is in Amiras. 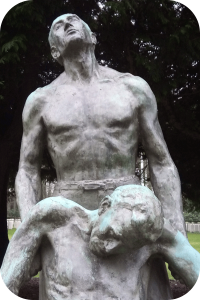 Relief, part of the Bittermark monument

The Gestapo gets 300 people from prisons in Dortmund, Bochum and Herne. They are German resistance people and forced laborers from France, Belgium, the Netherlands, Yugoslavia, Poland and the Soviet Union. They are taken to the forest of Bittermark and murdered there between March 7 and April 12, 1945. On April 13, 1945, the Americans occupy the area. 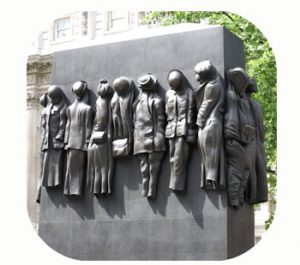 ‘The Monument to the Women of the Second World War’

The British Women Propaganda calls on women to actively participate in social life and war efforts in addition to fulfilling their domestic duties. From 1941, a form of military service was introduced for women. They are deployed as mechanics, engineers, ammunition workers, air raiders, bus and fire truck drivers. More than 640,000 women are actually active in the armed forces, flying with unarmed aircraft, driving ambulances, working as a nurse. 60 Women operate behind the enemy lines in the European resistance in the Special Operations Executive.