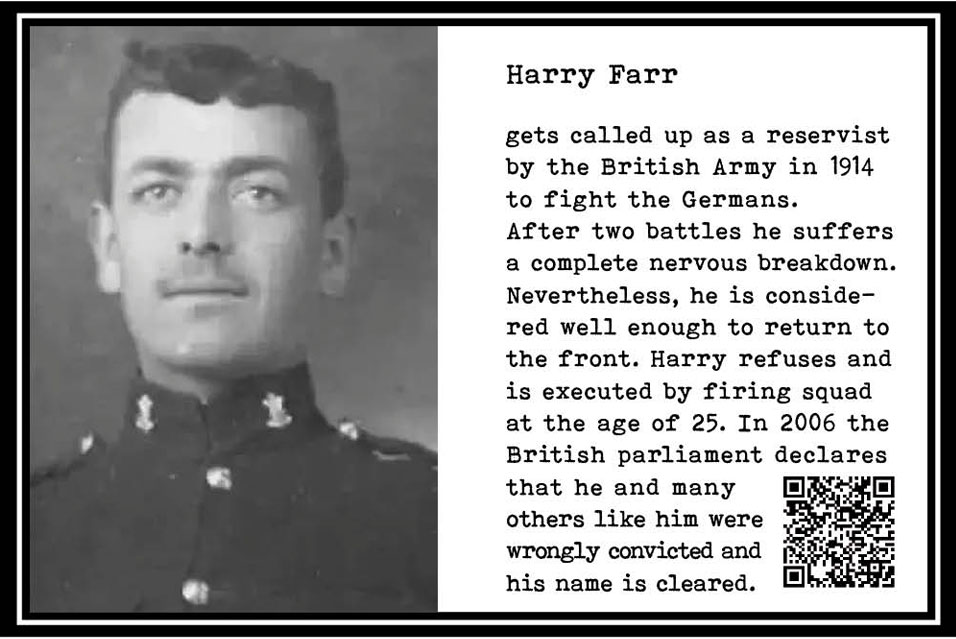 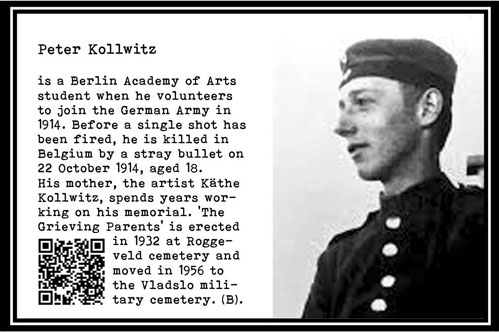 The First World War, or the Great War, broke out on July 28, 1914, exactly one month after the Austrian throne-successor Archduke Franz-Ferdinand was murdered in Sarajevo. If Austria declares Serbia the war and Russia chooses the side of the small Balkan country, the situation escalates rapidly.

The result is a struggle of many years on different fronts between the Allies (in particular France, Great Britain and Russia) and the centrals (Austria-Hungary, Germany, Italy and Turkey). The Netherlands remain neutral. When America joins the war at the beginning of 1918, the balance breaks down for the benefit of the Allies. On November 11, 1918, a ceasefire was decided the Armistice of Compiègne, France.

Victims: nearly 10 million soldiers and an estimated 10 million civilians, including the approximately 1.5 million killed in the Armenian genocide. 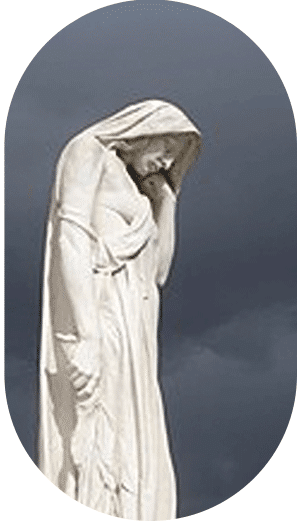 (photo is a detail of the 7.3 metres (24 ft) high memorial : the young crying Canada Bereft, also known as Mother Canada)

The Battle of Vimy takes place from 9 to 12 April 1917 on the western front in Northern France between Canadian troops, supported by the British, and German units. On the Canadian side, 3,598 people are killed and 7,004 are injured. 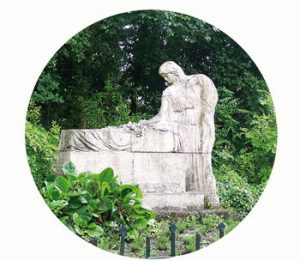 “Monument to French Refugees Died”
Inscription: “ILS S’ENDORMAIENT EN PARLANT DU RETOUR AU PAYS”
(“They passed away while they talked about returning to their country”)

Photo: Wikimedia Commons
In the spring of 1918 the Germans force around 40,000 mainly northern French citizens to leave their homes. They flee on foot to the Netherlands where they are received in different places. More than 450 of them die, 60 of them in Maastricht. 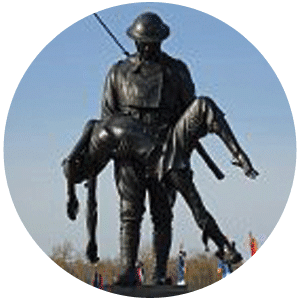 From 1917 onwards the United States become involved in the struggle in Europe. In addition to existing units, a new division is being formed for this purpose of soldiers from 26 American states. This division is therefore called “Rainbow Division”. In the summer of 1918 it makes an important contribution to the struggle to stop the German advance to Paris. This “Second Battle of the Marne” is considered a turning point in the war. The division loses a total of 14,683 men in WW I. This memorial commemorates the fallen from the state of Alabama. 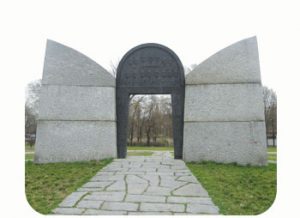 Photo: Moja Avantura
After Belgrade is bombed by the Austro-Hungarian army for the first time on 29 July 1914, the Serbian capital undergoes this fate again in early October 2015. It is therefore the most heavily bombed of all European cities in WW I. The city is taken on October 9. In 1931 the remains of the defenders are buried in a specially built Ossuary on the New Cemetery in Belgrade. 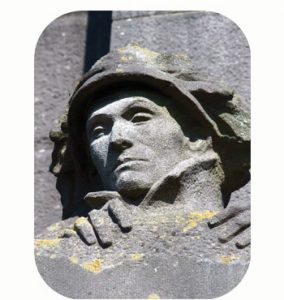 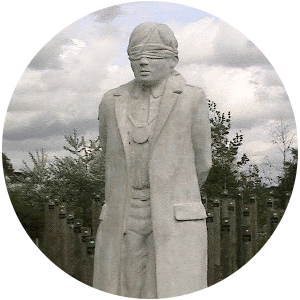 This memorial represents the 17-year-old blindfolded Herbert F. Burden and thereby commemorates the 309 British and Commonwealth soldiers who were executed at dawn, mostly for desertion or alleged cowardice. The court-martial takes no more than half an hour for each trial. Appeal is not possible. The families do not receive an army allowance. In 2006, the executed are posthumously rehabilitated. 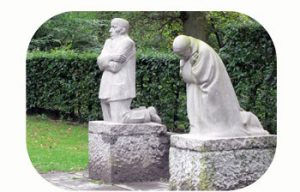 Photo: Wikimedia Commons
It is a double image: the father mourns grimly, gloomly, his pain surpressed. The mother mourns huddled, deeply sad, full of sorrow. Käthe proposes to place the kneeling images in such a way that they overlook the entire cemetery, as if they are mourning not only for her son Peter, but for all 25,644 soldiers who are buried on Vladslo. 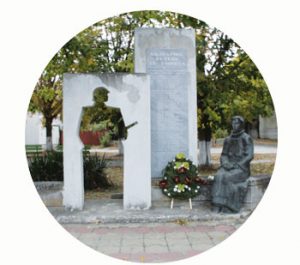 Soldier’s monument
Inscription: “Bulgaria, they died for you”

After Bulgaria gains its independence in 1908, the country in the following years becomes embroiled in the Balkan wars that end in a heavy defeat against combined forces of Greece, Serbia, Romania and the Ottoman Empire. In the First World War, in which Bulgaria takes the side of Germany and Austria, the country is worsted again. 87,500 Bulgarian soldiers, mainly conscripts, die in this war. This memorial in Chernevo in north-eastern Bulgaria commemorates the 48 soldiers from this village who fell in these wars as well as in the Second World War. 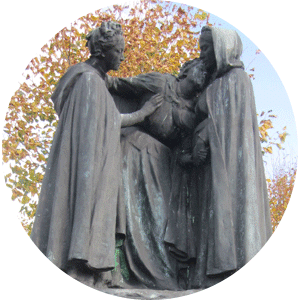 The western front in France and Belgium was 750 km long and hardly changed between 1914 and 1918. On both sides it mainly consisted of trenches. There were regular attacks back and forth, from 1915 also with poison gas. In total, more than 3.5 million people are killed, wounded, imprisoned or become missing, of which nearly 2 million on the Allied side. 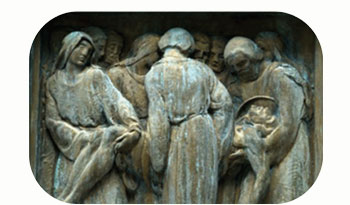 Bronze wall panel without a name

In World War I not only on the western front, but also high up in the Alps, a year-long trench war is going on after Italian troops have tried in vain to conquer South Tyrol and the Karst on the Austrians. More than a million soldiers are killed on this Italian front. 9,707 Italian soldiers are buried in Pocol Cemetery near Cortina d’Ampezzo. Four bronze panels with scenes of life and death in the trenches are placed on the walls of the 48-meter high monument in the cemetery. 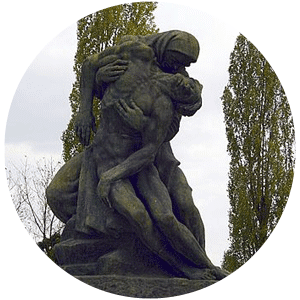 Monument to the fallen Croatian soldiers in World War I

This cemetery contains the bodies of 110 Austrians, 450 Hungarians and 2800 soldiers from Slovakia and other countries. In 1994, proud Croats mistakenly placed a plaque here in honour of the fallen Croatian soldiers, not knowing who were buried here. 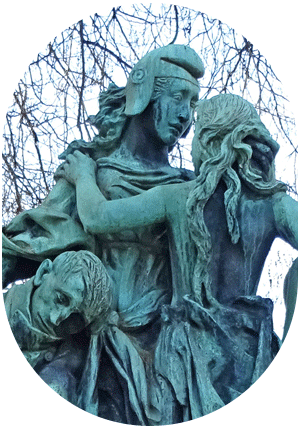 In the summer of 1914, Czechoslovak artists and artisans in Paris in large numbers decide to make themselves available on the French side in case of war. On October 23, 1914, a first batch of 250 men, under the name Nazdar Company, leave for the Champagne front. More units will follow later. A total of 650 Czech warriors die in France during the First World War.