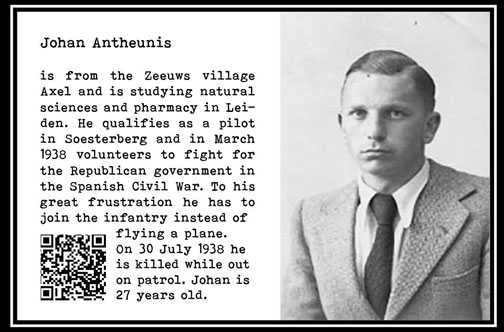 On July 17, 1936, a group of right-wing generals committed a coup against the progressive Spanish government. The coup is only partially successful. The insurgents (Nationalists) conquer large parts of north and northwest Spain under the leadership of General Franco, but the middle and south, just like Catalonia, remain loyal to the republic.

The result is a civil war lasting almost three years. In October 1936, a people’s army was established on the republican side, of which all left-wing militias operating independently of each other would form part. Part of that army is the International Brigades, which are formed by approximately 32,000 foreign volunteers who have come to the aid of the government. Among them are 700 Dutch.

Despite this support, the Nationalists are slowly but surely gaining ground, and when Barcelona falls into their hands in January 1939, it will break the republican resistance. After the capture of Madrid at the end of March of that year, the Nationalists proclaim themselves victors. Until 1975, Franco remains the sole ruler in Spain. 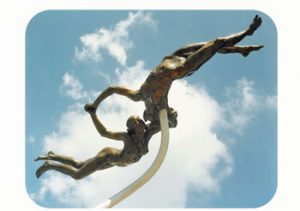 Inscription: “They’ll never get through”

The International Brigades are part of the republican people’s army that fights against General Franco’s Nationalists in the Spanish Civil War (1936-1939). The unit consists of approximately 32,000 volunteers from more than fifty countries. They are members or sympathizers of communist parties, but also socialists, anarchists and left-wing liberals. Of the approximately 700 Dutch volunteers, around 300 survive the civil war. Upon their return, they are deprived of their Dutch citizenship because they have been employed by a foreign armed force. 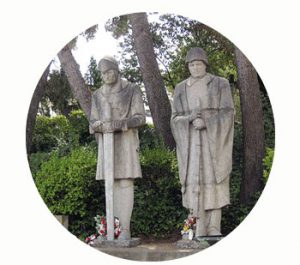 Monument to the fallen of Terrassa

This statue is erected in 1944 in honour of the Nationalists who fell in the Spanish Civil War. A plaque was added a few years ago: “The city of Terrassa commemorates the victims of the war”, this to make it a monument for all victims of the civil war. However, the origin of the monument has not been erased. Nationalist monuments are controversial in Spain because of the close ties between the Nationalists and the Germans during the Second World War, which is why they are often poorly maintained or removed. 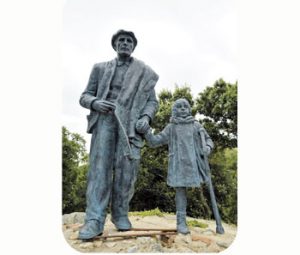 Monument for the exiles

When Barcelona falls into the hands of the Nationalists in early 1939, around 440,000 Republicans (soldiers, militia members and civilians) flee to France. The monument is inspired by a photo of the Gracia Bamala family, father and his three children. Mother dies in the bombing of their village of Monzón. A year and a half later, in France, the father dies. The family asks for the return of the children and then takes them to an orphanage where they are treated as “bad children” because they are children of the losers. 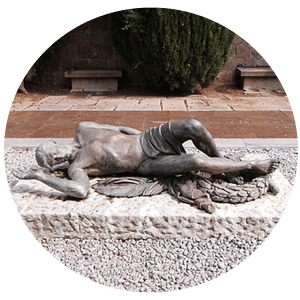 ‘The fallen soldier until 2005, when the monument was renamed:
‘In honour of all who gave their lives for Spain’

The castle of Montjuïc in Barcelona has already been a prison and execution site for a long time when Republicans take possession of it during the civil war. They detain nearly 1,500 people, of which around 250 are executed. After the fall of Barcelona in 1939, thousands of Republican soldiers are imprisoned here and later deported to the Horta concentration camp near Barcelona. The victors place this monument in 1940 on the former execution site. 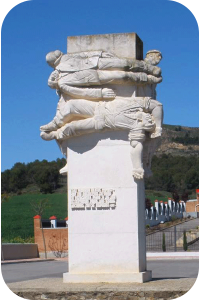 Monument for the victims of the execution on September 10, 1936

The memorial is located near the cemetery where 401 victims of execution by the Nationalists on September 10, 1936, are buried. More than 2,000 other victims, from almost every village in La Rioja, are buried in mass graves in the region. Until 1945 many more opponents of the Nationalists are executed by the so-called “Spanish White Terror”. 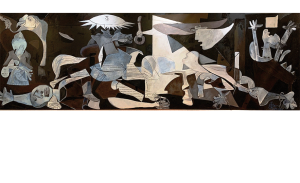 Guernica, in the Spanish Basque Country, has 5,000 inhabitants. It is Monday, April 26, 1937, market day, when the city, with the consent of the Spanish Nationalists, is bombed by the German Condor Legion and Italian bombers. The aim is to break the Basque resistance against the nationalist uprising. The city is largely destroyed. The exact number of fatalities is still disputed by historians. Picasso makes his famous painting (3,49 m high and 7,76 m wide) for the (republican) Spanish pavilion at the 1937 World Exhibition in Paris.