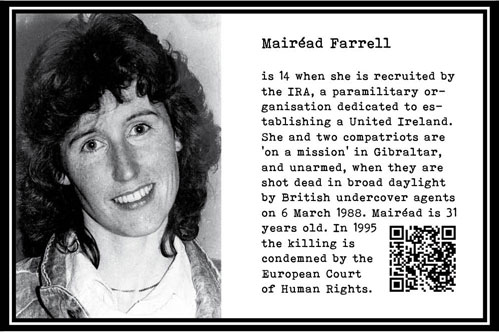 Although independent in name, Ireland is actually a colony of England until the beginning of the 20th century. In the predominantly Catholic country, it is the British, Protestants nobility who is in charge and who also owns the most land.

The Irish population lives in bitter poverty, partly as a result of a disastrous famine in the mid-nineteenth century. Partly because of this, the call for Irish self-government is growing, which in 1916 leads to the so-called Easter Revolt, followed by a guerrilla war against the English ‘occupiers’.

In 1921, a treaty is concluded whereby Ireland becomes independent, while six northern provinces, where relatively many Protestants live, remain part of the United Kingdom. This is the seed for ‘The Troubles’, the conflict that breaks out there between the Catholic paramilitary groups and the English army in the late 1960s. The IRA (Irish Republican Army) in particular has committed a number of bloody attacks. Only in 1998 will peace be restored in Northern Ireland with the signing of the Good Friday Agreement. 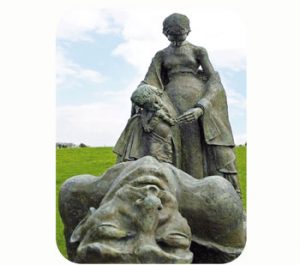 In December 1921, England and the provisional Irish government sign a treaty recognizing Irish independence. However, part of the Irish Republican Army (IRA) does not consider the treaty to go far enough, resulting in a violent civil war. A very cruel execution takes place in March 1923 near Ballyseedy Cross, County Kerry. Nine IRA fighters are tied there by government troops to a land mine, which is then detonated. As if by a miracle one of them survives, making the atrocity known. 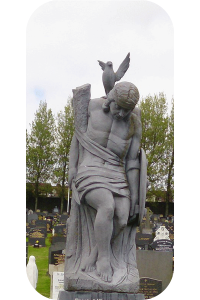 Design: unknown, the image represents Cú Chulainn, the most important hero and demigod of Ulster mythology

After years of unsuccessful demonstrations by the Catholic inhabitants of Northern Ireland for equal rights, riots between Catholics and Protestants break out in August 1969. Soon the riots turn into an armed conflict (‘the Troubles’), which continues until the beginning of this century. One of the main hot spots is Derry. Already in 1975 a monument is erected in a cemetery in the Creggan district for 46 killed members of the IRA. According to official sources, between 1969 and 2001, a total of 3,532 people die as a result of the conflict. 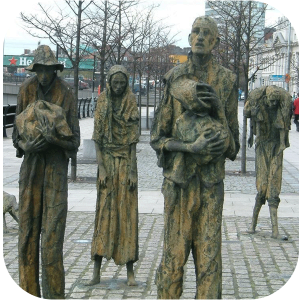 Irish farmers have been leasing their land for centuries from English noble landowners. They chiefly grow potatoes, the main food of the poor Irish population. The fact that the potato harvest fails three times between 1845 and 1850 is therefore a catastrophe. Countless farmers can no longer pay the rent and are evicted from their land. In addition, the English export Irish grain and dairy products on a large scale to England. The result is a great famine that kills a million poor Irish people. Another million are forced to emigrate, mainly to America. 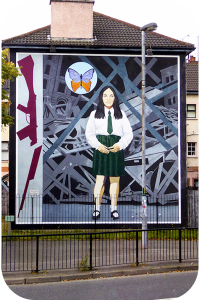 ‘The death of innocent’

The one-hundredth victim of the civil war in Northern Ireland is Annette McGavigan, a 14-year-old schoolgirl. After one of the countless riots between local youth and the British army, she takes to the streets with other children on 6 September 1971 to collect the remaining rubber bullets. Suddenly the soldiers shoot again. Annette is hit in the back of the head and dies on the spot. The perpetrator is never traced. 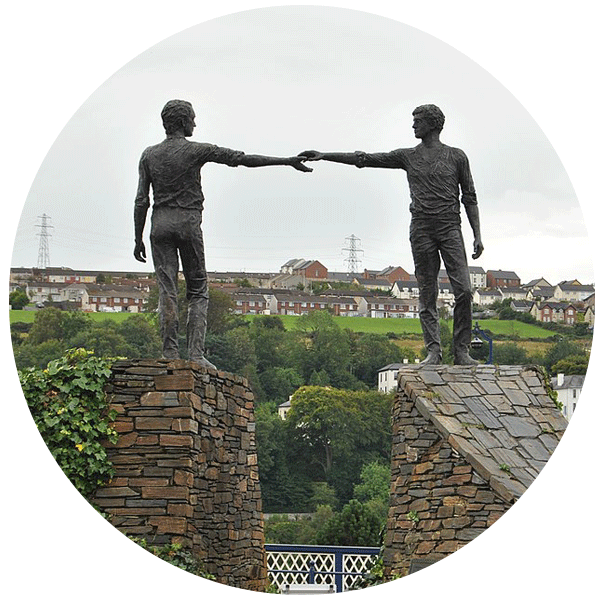 ‘Hands across the divide’

In the middle of (London-)Derry, on a roundabout near the river Foyle, is situated this remarkable statue of two men reaching out to each other. It is unveiled in early 1992 as a sign of hope and reconciliation between Catholics and Protestants. On that day exactly twenty years have passed since on Bloody Sunday fourteen unarmed civilians demonstrating for civil rights are shot by the British army. 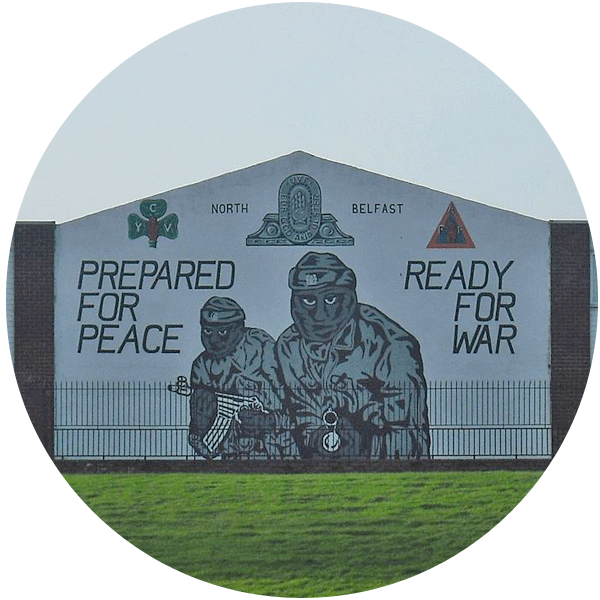 Unveiling: in 1997 on Shankill Road and again in 2004 when moved up on the hill, at eye-level with the motorway roundabout

The many murals, which have been applied to blind walls since the late 1970s, count among the major tourist attractions of Belfast. Initially, the paintings are based on the armed struggle between Republicans (Catholics striving to join Ireland) and Loyalists or Unionists (Protestants who want Northern Ireland to remain British). In Shankill Road, the heart of the Protestant neighbourhood, mainly ‘loyalist’ fighters are glorified. Various militant paintings, such as this one, have since been replaced by murals on a more peaceful subject at the behest of the municipality.