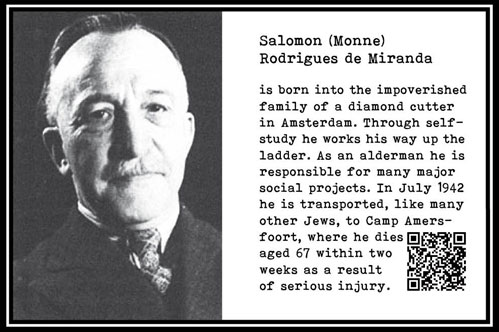 The Holocaust, also known as Shoah, refers to the systematic persecution and genocide of Jews by the Nazis and their allies before and during the Second World War. Roma, Sinti, homosexuals and the disabled are also prosecuted and murdered on a large scale.

For this purpose, special extermination camps, such as Auschwitz-Birkenau, Sobibor and Treblinka, are being built mainly in Eastern Poland. Once there, the Jews and other civilians arrested during raids are gassed almost without exception. 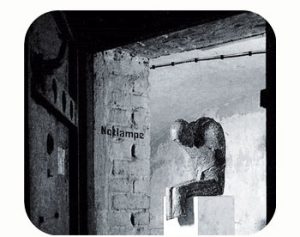 Photo: Mahn- und Gedenkstätte Düsseldorf
The statue is situated in the building where the Gestapo (secret state police) and later the SS (paramilitary organization within the Nazi party) reside. They recruit 40,000 forced laborers for the war industry in this region. Political and racial “popular enemies” are detained, interrogated and often tortured here before being deported to concentration or extermination camps. Of the Jews from Düsseldorf who do not flee, only 60 return after the war, which is 2%.

During the major razzia of 16 and 17 July 1942, the Paris police arrests on behalf of the Germans more than 12,000 Paris Jews, including 4,000 children. At first they are detained in the Vélodrome d’Hiver and then transferred to the Drancy, Beaune-la-Rolande and Pithiviers concentration camps to be deported from there to the extermination camps. Only a few of them survive. The monument represents a Jewish family waiting for transport.

On February 27, 1943, around 2,500 half-Jewish and mixed-married Jewish men in Berlin were arrested and driven together in a building on Rosenstraße to be deported. Their women are starting a protest, more and more women are joining in. Eventually the deportation is cancelled. Until the end of the war the men carry out forced labour. 8,000 of the 175,000 Berlin Jews survive the war, people in hiding and Jews from mixed marriages included. 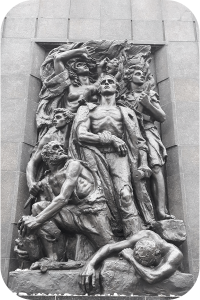 Monument to the heroes of the ghetto uprising

From 1940, the Polish Jews are forced to move to ghettos in their city. In Warsaw, 500,000 people are crammed in this fenced city district. From there, the Nazis deporte them en masse to the Treblinka extermination camp. If that becomes clear to the remaining 40,000 – 50,000 Jews, they rebel. Initially they succeed, but on April 19 the total destruction of the ghetto follows. Around 7,000 people are killed in the uprising. The remaining 40,000 Jews are murdered in Treblinka. 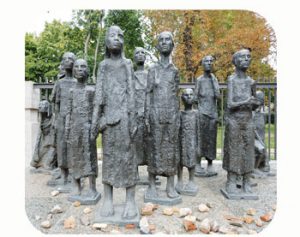 Monument to the Jewish victims of fascism

Sculptor Lammert works for a long time on a monument for the Ravensbrück concentration camp, but he dies prematurely. One part is finished and is placed, after consultation with his son, in Berlin in 1984. Between 1939 and 1945, 132,000 women and children, 20,000 men and 1,000 teenage girls from 40 countries are imprisoned in Ravensbrück. 55,000 of them are from Berlin. More than 90,000 prisoners die due to executions, hunger or illness, or as a result of medical experiments. 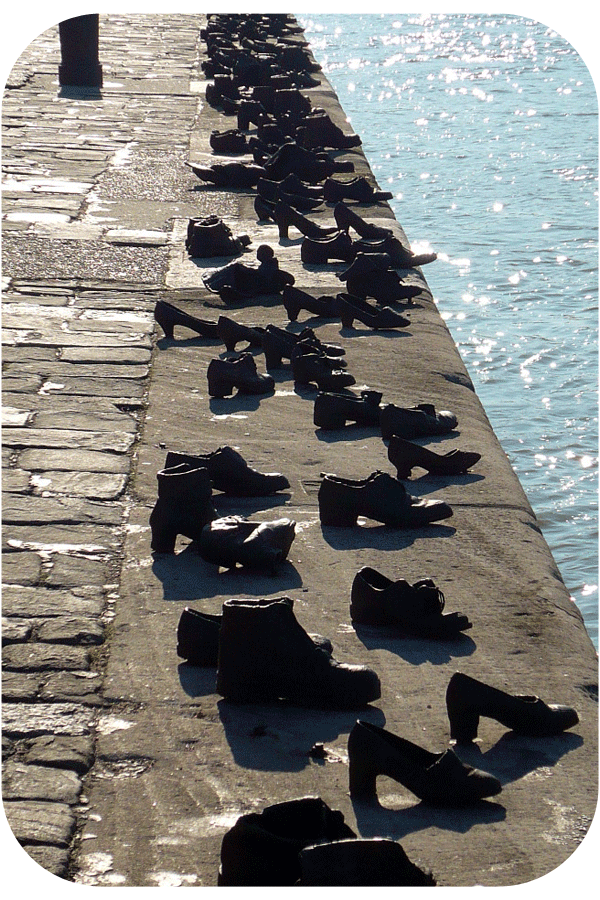 The 40 meter long monument on the quay consists of 60 pairs of iron shoes. In 1944 and 1945, the National Socialist Arrow Crossers bring a total of around 800 Jews to the banks of the Danube. They are instructed to take off their shoes and stand facing the water. Once shot, they fall into the river.