This installation was created for the SustainAbility Art project.

Sustainability is a very wide-ranging issue and I chose to approach it from the perspective of the air quality in our cities. One of the indicators of that quality is the level of respiratory problems. What is it like when you are unable to experience real silence anymore as a result of chronic respiratory and breathing problems? The visitor is given a plastic-free disposable straw, blows air into the red bag and then hears . . .

The white tubes on the right are mouthpieces (flow transducers) from a doctor’s clinic in the Amsterdam neighbourhood De Pijp (postal code 1073). They were used to carry out pulmonary tests in the period from October 1  to December 31, 2018. 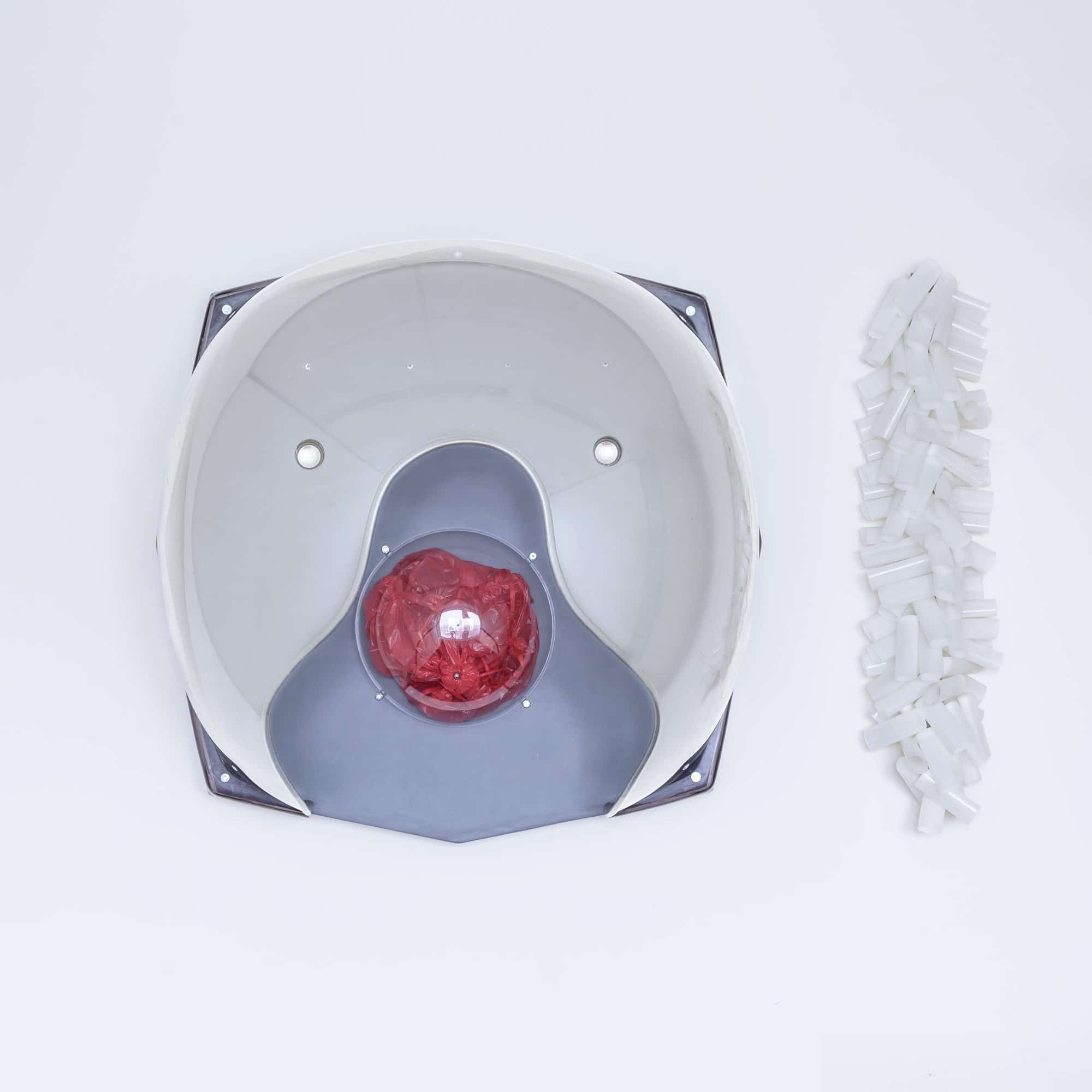 Mouthpieces
The mouthpieces are used during spirometry tests, a simple method for identifying pulmonary disorders like asthma and COPD at an early stage. The test is also used to determine the effectiveness of the medication used.

The mouthpieces are discarded after each test. The 88 pieces I used in this installation (after being thoroughly cleaned) come from a doctor’s clinic in De Pijp that has 7000 patients on its register. 47 of the mouthpieces were used by patients with asthma, while the remaining 41 are from COPD patients.

Respiratory problems in the Netherlands
In 2017 the number of asthma patients in the Netherlands was estimated at 1.75 million. Approximately 641,000 of these patients received medical care from a doctor in that year, which represents 3.8% of the total population. And the number of people suffering from COPD (chronic bronchitis and/or emphysema) is almost 600,000 or 3.5% of the population.

Amsterdam primary school children
The primary school questionnaire that parents were asked to fill in contained the following question: “Does your child suffer from any physical or health problems at the moment?” One of the answer options was: respiratory problems, coughing, shortness of breath, throat and/or nasal problems. In the whole of Amsterdam, 7.3% of children between the ages of 5 and 10 suffer from one or more of these problems. The figure for De Pijp is 11.7%. (Source: GGD Amsterdam)

De Pijp
De Pijp is a neighbourhood with long streets that was built primarily to house the working class around the turn of the 19th century and using very cheap building materials. Today it is a popular multicultural neighbourhood with 35,345 residents, almost half of whom are men and women between the ages of 25 and 45. At a figure of 64%, the number of single-person households is very high. 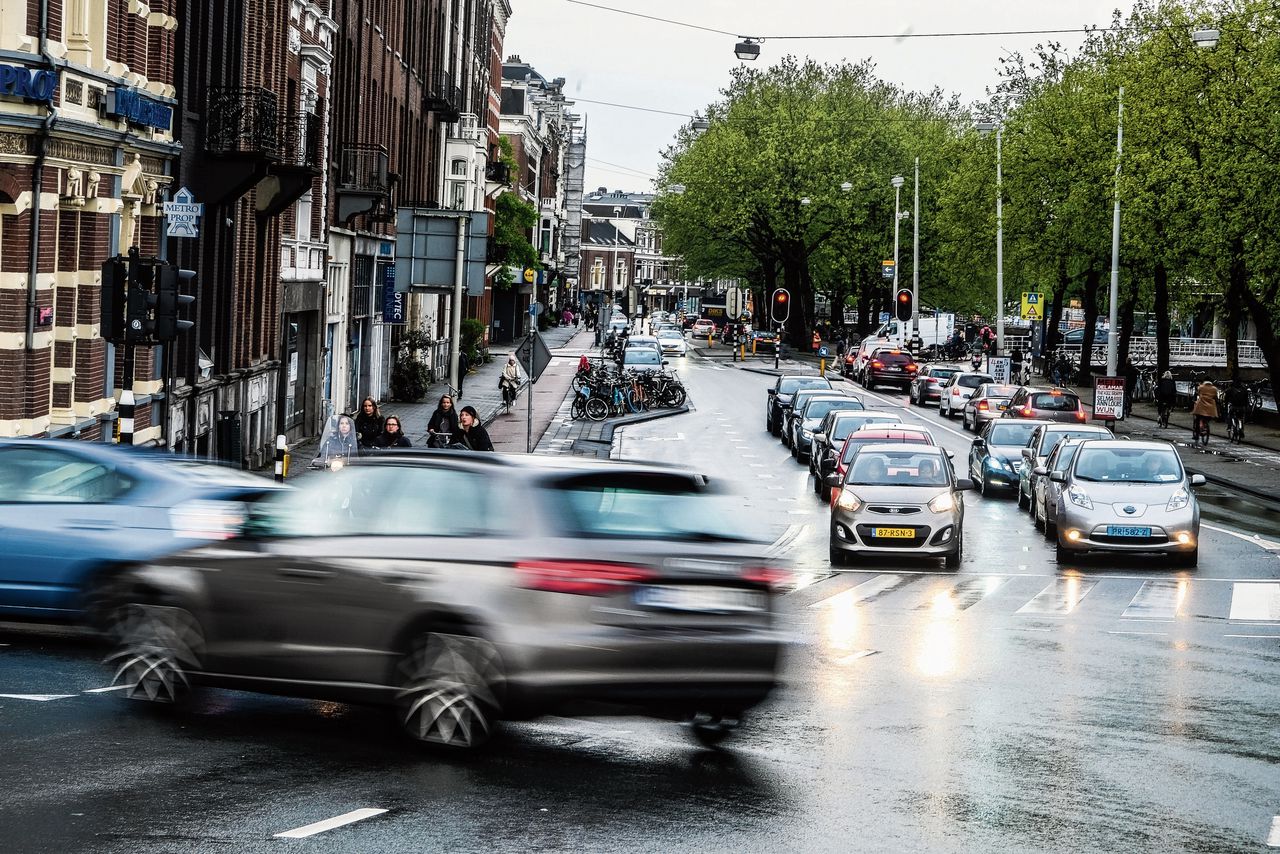 Air quality
The main traffic arteries in De Pijp are the Ceintuurbaan and the Stadhouderskade from east to west, and the Ferdinand Bolstraat, Van Woustraat and Amsteldijk from north to south. On the map below you can see that the Stadhouderskade is one of the most polluted streets in Amsterdam. 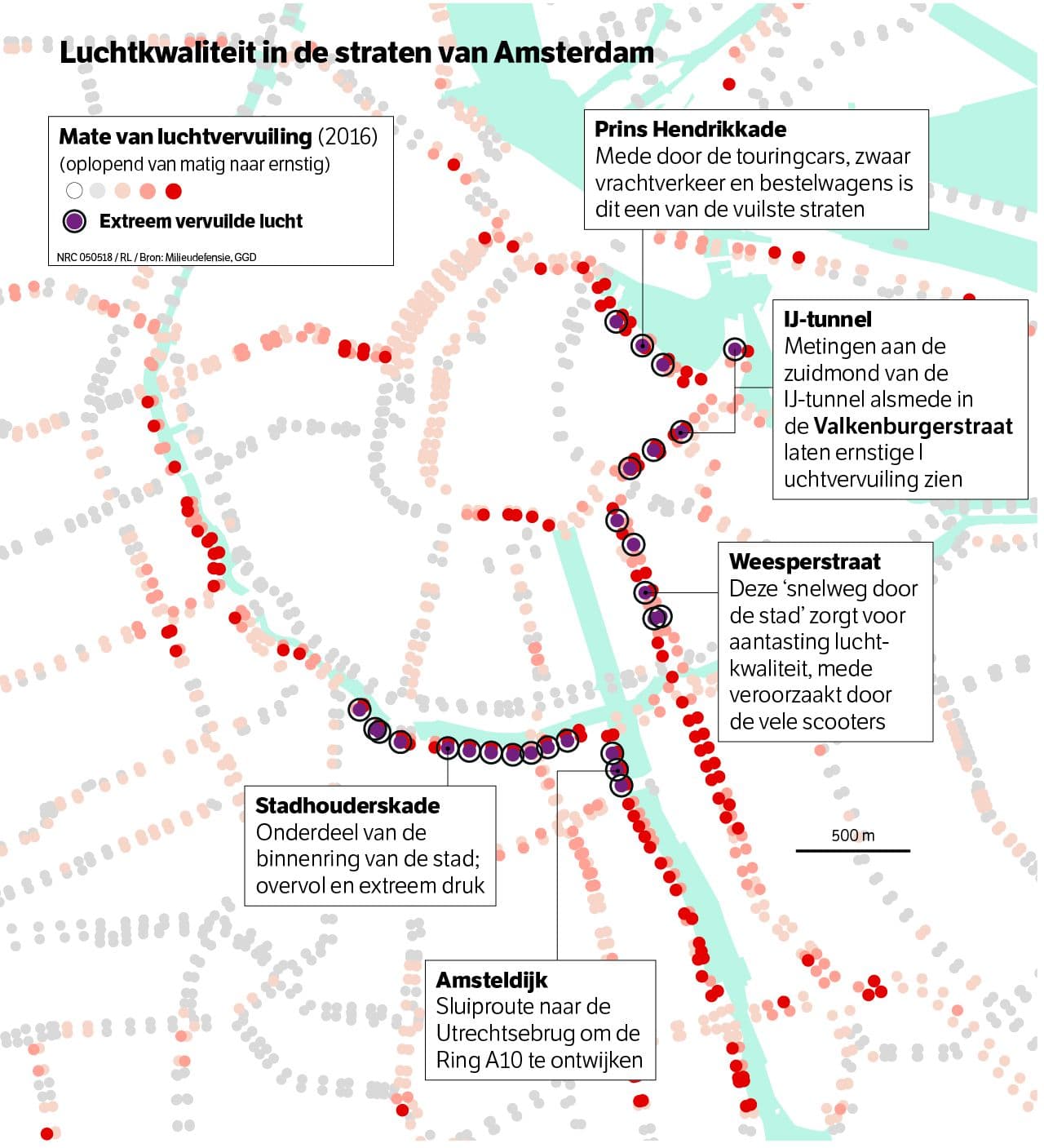 Air quality in the streets of Amsterdam

Check the current air quality in your neighbourhood

Monitoring air quality
Using the air quality monitoring system maintained by Amsterdam’s public health service, the GGD, the Amsterdam city council is able to keep an eye on the air quality in the city. This system is made up of 12 monitoring stations that monitor the air quality 24 hours a day, 365 days of the year. One of the stations on the Stadhouderskade had in 2019 even provided a reading of 42.4 micrograms of nitrogen dioxide per m3, while according to the WHO and EU regulations the maximum should not exceed 40 micrograms per m3. There is also a national monitoring system that is maintained by the RIVM (National Institute for Public Health and the Environment).

NO2 monitoring stations in Amsterdam-De Pijp

Corona effect?
The corona measures seem to have a positive effect on the air quality in Amsterdam. However, the influence of the weather on the supply and spread of air pollution is very large. The weather in the spring was very different from what we normally see in this period. At the end of August 2020, no analysis is yet available that includes the effects of the corona measures and the weather on air quality in Amsterdam.