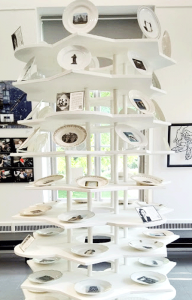 The concept of Tower of Babel is, among other things, a symbol of haughtiness and division that can lead to war. It is the political leaders and the generals who pull the population into a war. It is the ordinary people who experience the consequences every day, who have to deal with it (in Dutch “get it on their plate”). In this time of emerging nationalism, I want to reflect on that reality with this installation.

The tower is made up of 10 “dining tables”, each representing a war, a genocide or a war zone. For the First as well as the Second World War two tables are set. At every table, there is room for 7 people, but it is set for 6. In the 7th place, you can see who is absent, killed, murdered or perished in that particular war.

The table point near the plate pierces your stomach, symbolizing the grief of the relatives for their lost loved one. Each plate shows a memorial that commemorates the war of that table.

These 60 monuments in total are spread throughout Europe in 28 countries.

Below you’ll find for each table brief background information on the monuments and on the absent person of that table.

PS
I have compiled the information on these pages with the greatest possible care. However, I cannot guarantee that there are no inaccuracies in the texts or information is missing. The stated numbers of fatalities per war are an indication.

I have undertaken efforts to trace copyright holders and to obtain their permission for the use of their photos on this website. Anyone who believes that his / her material has been used here unfairly without prior permission, please contact me.